A Q&A with Doug Wilhelm 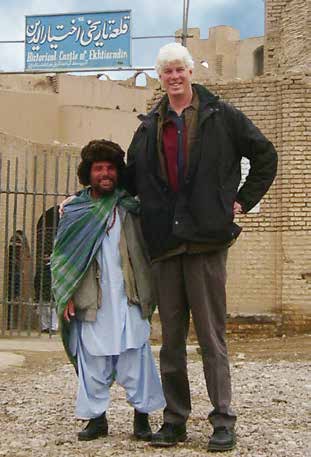 How did you come to write Street of Storytellers?

That’s a story in itself!

After I graduated college in 1974, I spent half a year painting houses and then traveled from England to Pakistan, India and Nepal by train and bus. I was very struck by the dramatic drive down the arid, dangerous Khyber Pass into the Peshawar Valley, which is the green gateway to the Indian subcontinent. After six months, I came home — but I wanted to go back, and I wanted to write about it.

I went to work as a reporter, then an editor, for a group of weekly newspapers in New Jersey, where I’d grown up. Then in 1979 a group of Iranian students invaded the U.S. embassy in Tehran, Iran. They kidnapped 52 Americans who worked there, and held them hostage for 444 days. This was the first big crisis between my country and the Muslim world — and it struck me that neither side seemed to really know much about the other.

So I left my job, took a backpack and a portable typewriter, and traveled from the Arabian coast to Pakistan by ship, then by train up to Peshawar. I wanted to write a nonfiction “journey story” about the people I met and the experiences I had, trying to understand.

In Peshawar I stayed at the Royal Hotel, explored the Old City, and made friends with a group of young men in Karim Pura Bazaar. I wrote down every conversation and observation, and kept maps, newspaper clippings and more. I then traveled farther north in India, and wound up teaching English in Kathmandu, Nepal. I was away for two years, and — except for being a parent, which came later — this was the greatest experience of my life.

I wrote a nonfiction book about my experiences in Muslim Asia, but nobody would publish it! My original book was rejected 75 times. Eventually I put it away, and started to write fiction for middle schoolers and young adults — but I kept all the material from Peshawar, and I never forgot that time and place. After 9/11, it became clear that the Al Qaeda movement, which brought down the World Trade Center, had originated in Peshawar in the 1980s. And I began to think about a YA novel, a sort of thriller set there and then.

So you spent time in Peshawar in the early 1980s. Did anything in Street of Storytellers actually happen to you?

Oh yes! A number of scenes and incidents in the novel are closely based on things I experienced. For example, in the chapter “A Seller of Cloth,” Luke
is walking into the Old City, following Yusuf ’s bobbing head in the crowded streets — and as he passes a man who’s frying fish in a blackened pan, the
man asks where he’s from. Luke says “America,” and the man says: “First god is God. Second God is America!”

That happened to me, just as described.

Was it difficult to research this novel? How did you do that?

It was challenging. The Pashtun society of Peshawar is very conservative, and most of private life in this culture is not open to outsiders. It’s especially hard to learn what life is like for girls and women there; in my time in the city, I never once met or spoke with a woman. But in the years since 9/11, more has been written and shared about this part of the world — especially about Afghanistan, where Pashtuns are the majority ethnic group, and about the struggles of women there.

Then in 2007, I got lucky — I was asked to spend a month in Afghanistan, staying in the capital city and traveling around the country for a writing project. Kabul, the capital, is mostly Pashtun, and the trip gave me a fantastic chance to observe and learn a lot more.

Back in the U.S., I sought advice from several young Pakistani women. I met two of them in middle schools on my travels with The Revealers, then I talked with several more at Middlebury College, which I live quite near. These young women answered my questions and gave me insights and good advice. Also, of course, I read a whole lot of books and articles. And I searched out videos, on Youtube and elsewhere.

A Q&A with Doug Wilhelm con't

Music is a big part of this novel. What’s the story there?

Music means a lot to me — I play conga drums, percussion and harmonica in a couple of bands here in Vermont, and I’m interested in how different cultures come together to create new styles. But in the midst of developing this story, I got stuck. I knew there was more I needed to learn about, but I didn’t know what it was. I knew Luke loved rock and reggae music, and I was interested in the Sufi shrine culture of Pakistan. I thought that should be part of my story, and I was trying to learn more about it.

So I went to visit a professor at Harvard University, Ali Asani, who’s an expert on Islam in Pakistan and India. Professor Asani was very kind to me — and he told me about Sufi rock, which like most Americans I knew nothing about. He suggested that I go on Youtube and search out a program called Coke Studio Pakistan. I did, and I was captivated! That was the breakthrough. It opened up a whole new dimension for the novel, and after that everything started to come together.

Your book tells the story of Gandhara, a little-remembered civilization from 2,000 years ago that made a big impact on the world. How did you learn about that?

In a used-book store many years ago, I happened on a short nonfiction book about traveling in the region by Arnold Toynbee, a great British world historian.  He gave a vivid sketch of the contribution Gandhara made to the world, and he wrote a two-page chapter about the Buddhist ruin at Takht-i-Bahi.

When I was in the Peshawar Valley, I visited Takht — and ever since then I’ve been fascinated by this story. Often when I had a day off from my work as a freelance writer, I would go to college libraries and dig through the old British books, from the early 20th century, that first told about the rediscovery of this civilization and its incredible artwork.

What was your purpose in writing Street of Storytellers? What do you hope it will mean to readers?

I don’t believe in trying to teach a lesson in a novel, I think that makes for a boring book — but I did want to write a suspenseful story that would be fun and interesting to read, and that would ask readers to think.

As part of my research, I read a lot of thrillers. But I didn’t feel sure that I could hold readers’ attention, through a pretty complex story that blends the rise of modern extremism in Pakistan with the ancient story of what was created in Gandhara. Could I ask readers to absorb all that? The critical choice that Luke finds he has to make is one that I believe we all face, as our world today is challenged by rising hatred and extremism. Could this story get readers thinking about that?

One day I was driving my son Brad back to his college. I told him what I was working on, and that I was worried about this. He said, “If you can make people turn the pages, you can make them think.” I thought that was the best advice — and I really tried to follow it.

What people think, if they read this book, is totally up to them. Whether a novel means something to you depends a lot on who you are, what you’ve experienced in your life, and what you bring to the reading. But I think the appeal of many good suspense novels, mysteries and thrillers, is that you do learn things — you become more aware of the wider world and how it works. Maybe in the end you understand a little more, even perhaps about yourself.

If that were to happen for some people who read Street of Storytellers, I would be very happy. I’m actually already happy! I searched for this story for most of my adult life, and finally found it. I’m just thrilled that this book is finally going out into the world.