What the characters are wearing

The wool cap called a pakol, worn by many Pashtun men, is believed to have been brought to the region by the Macedonian soldiers of Alexander the Great, in about 330 B.C. The statue at left, from the time of Alexander, shows a Macedonian boy wearing what was then called a kausia.

Photo at left from the British Museum.

In the Pashtun culture, the long-shirted pajamas called shalwar kameez, shown here with a vest, are everyday wear for boys, girls and men. Women wear them too, indoors or, often, outdoors beneath a burqa or chador.

The djellaba is a traditional men’s garment from Morocco. 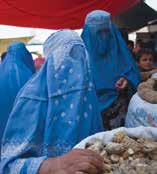 Women wear burqas in a market in central Afghanistan.