About the Author: A Letter from Doug Wilhelm 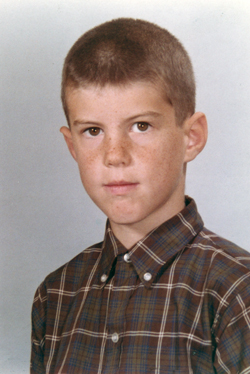 I thought I’d write this as if it were a personal letter, from me to you. If you’d like to write back, please do! Here’s my contact page.

In my books, I'm trying to tell good stories that have meaning and connect with young people's lives today. My writing for young adults is based on listening to them, which I try to do often. I’ve written and published a total of 16 and one-half books for young readers. (The “one half” is because The Prince of Denial, which came out in 2013, is a major remake, with a completely different ending, of a 2001 novel titled Raising the Shades. Sorry if that’s confusing.)

I’m a full-time, self-employed writer. I live in Weybridge, Vermont, a very small rural town just outside Middlebury in the Lake Champlain Valley. I’m married to Cary Beckwith, a child and family therapist who does wonderful work helping kids heal when they’ve been hurt inside. I have a son, Bradley, who’s in his late 20s, and a stepson Nate who’s in college. About me, the first thing people tend to notice in person is that I'm very tall. I'm six foot ten! When I visit schools, this always causes a stir.

Something I could do
I was born in 1952 in Portland, Oregon, and moved to suburban New Jersey when I was in kindergarten. All through elementary school I was an avid reader. Suddenly, in middle school, I began to write. I was writing stories, poems, even a play. Until then, I hadn't been good at much of anything—I was skinny, awkward, and not very popular — and it made a big difference to discover that this was something I could do.

Like the main characters in The Revealers, my best-known novel for young adults, I was bullied a lot in middle school. The idea for that book grew, in part, out of my own experiences. (You can read about that in The story behind The Revealers).

I studied English and played basketball at Kenyon College in Ohio, and after graduating I traveled by land from Europe to India and Nepal. It was a great adventure, and I dreamed of going back. After working as a newspaper reporter and editor back in New Jersey for several years, I did return to Asia, to spend time talking and listening with young people who were Muslim. I wrote a book about my experiences—but no one would publish it. It was rejected 75 times! In those years I began to learn how challenging it is to be a professional writer.

But I kept at it. In 1982 I moved to Vermont, and within a couple of years I was earning my living by writing articles, newsletters, brochures, and things like that for all kinds of organizations. From 1985-92 I also covered Vermont for The Boston Globe. My son Bradley was born in 1987. His mom and I were divorced a few years later, but we’ve stayed good friends. I'm very proud of my son, who's now a tall, strong, kind young man.

By 1992, I was pretty frustrated in my dream of writing books. Oh, I’d written books — by then I had two nonfiction books for adults, and two picture books for little kids — but nobody would publish any of them. I received over 125 rejections in all. Then one day I was asked to write a science-fiction novel for "Choose Your Own Adventure," a popular series of interactive fiction for young readers. About three weeks later I submitted The Forgotten Planet, which was published by Bantam Doubleday Dell in 1994 — my first published book. It was also the only sci-fi novel I ever tried to write.

I went on to write nine "Choose" books — historical fiction, a murder mystery, war stories, a book about women’s swimming and performance-enhancing drugs at the Olympics, and more. In the process, I learned a lot about writing fiction that can keep young readers turning the pages.

No better reward
Moving on from “Choose Your Own Adventure,” I wrote the realistic young-adult novel Raising the Shades, which was published in 2001 by Farrar, Straus & Giroux. It's the story of a boy who is trying to cover up his dad's alcohol and drug problem, but finds he can't ... and maybe he doesn't want to. Raising the Shades was well-reviewed, and was nominated for the 2004-05 Indiana Young Hoosier Book Award. But it didn’t sell many copies, and it’s hard to find today.

The Revealers came out through FSG in 2003, and became my best-known novel. The Revealers has been the focus of reading-and-discussion projects in well over 1,000 middle schools. It has drawn strong positive responses from many thousands of young readers, teachers, librarians, guidance counselors, parents, and others. It is the middle-school selection in “Words that Heal: Using Children’s Literature to Address Bullying,” a curriculum resource from the Anti-Defamation League.

I have traveled all over the U.S., to visit schools where students have read The Revealers — from a one-room schoolhouse in Vermont to Silicon Valley, California, and from Houston, Texas to Caribou, Maine. I’ve had more conversations with middle schoolers than I’ll ever be able to count! What has meant the most to me is hearing how much The Revealers has meant to young people, many of whom cope with bullying and feel lonely and isolated, as I did back then. I couldn't ask for a better reward than to meet and talk with kids to whom my book has meant something.

New books, expanded family
In 2007, my YA novel Falling was published by FSG. It’s also realistic story, suitable for high schoolers and more mature middle schoolers — a combination sports, romance and crime novel. Many readers have let me know they’re passionate about Falling. In 2009, Scholastic published my first (and so far only) non-fiction book for young adults, Alexander the Great: Master of the Ancient World, an illustrated biography in the Wicked History series.

Cary Beckwith and I were married on Labor Day 2009. We’re a very happy couple, although the first thing people usually notice is that we look very different. I’m 6’10” and she’s 5’1.” But we danced at our wedding! At home we like to garden, ride bikes and go out to hear music. We’d love to travel more, if we could ever spare the time. 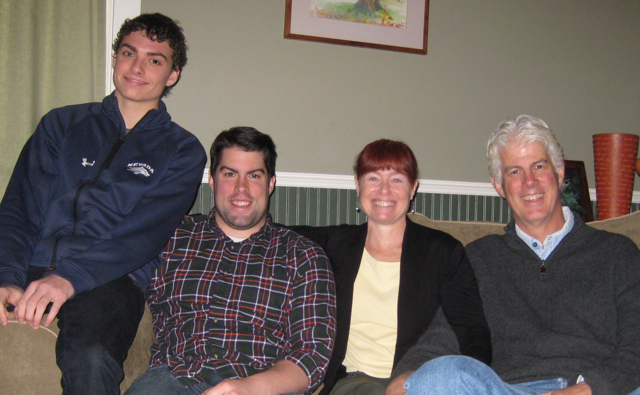 I’m also a working musician. I play conga drums, harmonica, and various percussion instruments in two bands: The Avant-Garde Dogs, and Deb Brisson & the Hay Burners. The second band plays alt country and Americana; the first does what we call “danceable music by extraordinary songwriters.” I’m interested in different types of American music, from blues to rock, from country to jazz — and I listen often to music from other cultures, from Cuban to West African to Pakistani. As a player, what I enjoy most is just making people dance.

Becoming an “indie” author/publisher
By 2012, I had brought out almost all my books with big New York City publishers — but those have been growing huger and harder to work with, so I decided to go independent. I created Long Stride Books, an “indie” publishing imprint that is distributed nationwide by the fantastic Independent Publishers Group, a division of the University of Chicago Press.

My first Long Strides book was True Shoes, the 2012 sequel to The Revealers. Set in Russell, Catalina, and Elliot’s eighth grade year, True Shoes features all the same characters, plus some new ones. Young readers often tell me they like this book better than the first one. I’m proud of True Shoes. It deals with cyberbullying — in fact, with both the positive and negative, creative and cruel, choices young people are making with networked communications. True Shoes also has a romantic triangle, and a lot more. When students ask what the title means, I recite the old proverb that opens the novel: "A lie can travel around the world while the truth is putting on its shoes."

In 2013 I published The Prince of Denial, a freshly re-imagined version of Raising the Shades. I was honored that two of the best-known authors for adults on addiction and recovery endorsed the new book. Claudia Black, author of It Will Never Happen to Me, writes that “Casey’s story addresses the Don’t Talk rule that families so quickly take on." William Cope Moyers, author of Broken: My Story of Addiction and Redemption, called Prince “a heartfelt story that speaks the truth about alcohol’s grip on the family, and inspires hope and healing for those seeking a solution.”

Overall, what I've discovered about publishing “indie” books is that it's a huge adventure! Today’s digital printing and communications make it possible for writers to do this, sidestepping the corporate publishers — but it definitely isn’t easy. There are many challenges to being an independent author; they’re just different challenges than the ones you face when working with a very big publishing company. My main challenge is that I don’t have the budget to promote my new books, the way big publishers can — so I depend on readers to help spread the word.

If you like any of my books, please: tell your friends. Tweet about it, post something, put up a review on Amazon.com.  Young people especially don’t realize how much power they have, as readers, to help good books find more readers. Your voice is powerful, if you use it.

Middle schoolers, pirate treasure, and Reading Matters
I continue to visit middle schools all over the U.S. that are reading my books. I enjoy these visits a lot. Middle schoolers often share with me something of themselves — and they're fascinating to me, as they struggle through what is often the most intense period of change and self-discovery in their lives. To write for young adults is a privilege and a constant, creative challenge. I hope to keep on writing these books for a long time to come.

My next book is Treasure Town, which will be published through Long Strides in April 2015 — and this is my first step into writing for younger readers. Treasure Town is a first chapter book, a “bridge into reading” story for elementary schoolers. It’s about three kids in a Florida beach town who are obsessed with finding the buried treasure of Jean Lafitte, who was the legendary “King of the Pirates” in the Gulf of Mexico during the early 1800s. The story is fiction, but the pirate and his legend of treasure are real.

Treasure Town is full of fantastic illustrations by Sarah-Lee Terrat, a professional artist who is also my younger sister. Its publication is being made possible by the 136 excellent people who backed our Kickstarter project for the book. We raised over $8,000, and had a lot of fun doing it. If you visit our Kickstarter page for Treasure Town, you can watch the video we made, featuring second and third graders, plus us — and many glimpses into the book.

Every week these days in my blog, Reading Matters, I write something about writing, reading, the creative process, my experiences in schools, my lifelong love for libraries — almost anything, really, that connects with reading. This is a good way to keep up with what I’m doing, if you’re interested. You can also write to me, and I will write back. Here again is my contact page.

Reading does matter — and so do readers. Thanks for wanting to find out about my work and me. Click here for a complete list of all my books for young readers, with a brief description of every one.